I’ve been so busy procrastinating (successfully) and learning how to say no (unsuccessfully) to other people’s requests that I haven’t had time to write my December blog… until now. I had planned to write it on the first Sunday of Advent (30th November) but here we are almost approaching the third week! Advent is a good time to stop and think as we begin to prepare… and I wanted to write something about that at the onset of its season – but it slipped by me whilst I was busy enabling others to be ready (through my work in the North Yorkshire Coast Church Circuit – paid and voluntary). It’s as though I’ve been waiting for my own Advent to begin … waiting for my time to be my own so I could simply be still and silent.

Each year as Christmas approaches I like to use the Advent period of waiting to take stock – a little like you do on New Year’s Eve before the onslaught of another year. This year though I’ve been busier than ever and feel I’m waiting for so many things that I have been jumping ahead of myself every step of the way. I’ve barely had time to ponder my faith journey through Advent… because I’m trying to get my head round the reason why, if I am due to retire next year, my job has not slowed down enough for me to prepare for that gift of retirement – my reward for having worked my whole life. I have hardly had time to think straight as I live from one day to the next filling it up with things I love to do. It will be quite nice not having to fit my regular job into that and I am looking forward to a diary that displays things of my own choosing. See? I have jumped ahead of the waiting time again… trying to sort next year out already. Really, there is no need for me to do that because God will have it all in hand anyway.

After an extremely challenging week fraught with anxieties and concerns, I was finally brought to my knees on the evening of 6th December at the community carol service between the villages of Cloughton and Burniston (where I live). The service began with the carol Silent Night’s first verse being sung in German by Revd. Mike Leigh (vicar with a beautiful voice!) then the congregation joined in using English. When a re-enactment of the Christmas Day Truce in the 1st World War was portrayed as a silent sketch by the young people, it really brought it home to me how trivial my anxieties and concerns had actually been that week. I let them go as I listened to a short sermon by Revd. Peter Cross that challenged me even further – to make peace with someone I was experiencing conflict with. Though I have chosen not to discuss this particular issue here, I did come away from the service feeling hopeful.

The following day (7th) was the second Sunday in Advent and, as if to mark the turnaround in my attitude regarding that certain situation, a double rainbow appeared over Cloughton and Burniston villages – arching over the place where the Truce had been re-enacted the previous evening. It felt like the hope of Advent had arrived for me. I believe that when God shines his light into the darkness, like he did that Christmas Day in 1914 and as he did for me at that carol service, there is hope for mankind. 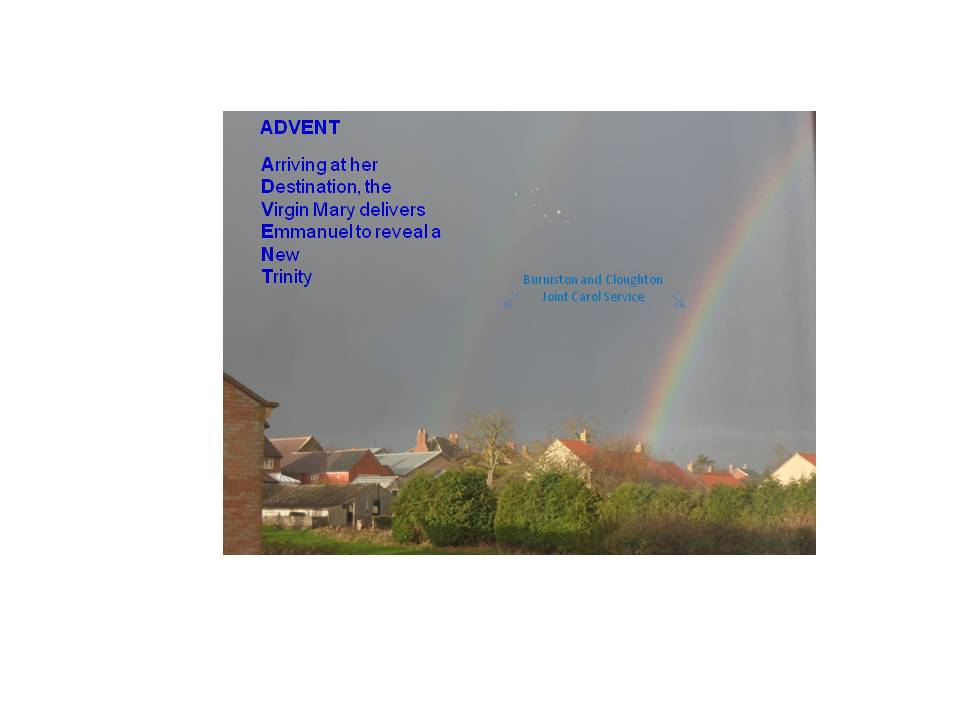 I’ve decided not to prepare for retirement as I know what I want to do with the gift and what God has planned for me will fall into place in its own time. I am going to go with the flow of it and relax, have fun and enjoy what is in store for me, as I enter into that new phase of my life – whenever it arrives.